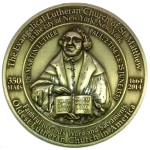 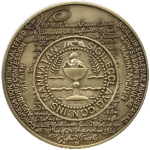 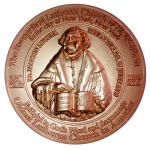 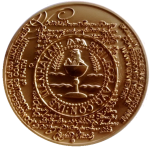 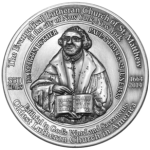 These three inch diameter commemorative medallions are being issued in a very limited number: Gold-plated at $50, Silver-plated at $45, and Antique Bronze plated – $35. (Please include $6 – USPS flat rate – for shipping costs).
Order now by email: stmatthewnyc@aol.com or by phone — 212-567-5948.
Payment can be made either:
– through our DONATE button on our secure Paypal account
or
– by check or money order made payable to “Evangelical Lutheran Church of St. Matthew”  and mailed to: 178 Bennett Avenue, New York, NY 10040.

St. Matthew is pleased to issue a commemorative medallion to mark this impressive milestone of 350 years of Gospel Ministry made possible by God’s abundant grace and mercy. In the 1640s the founders of the first Lutheran congregation along the Hudson River settled in the then Dutch colony of New Amsterdam on the island of Manhattan (now New York) fleeing from the horrors of the 30 Years War in Europe. This was also near the time of the first centennial (1630) of the presentation of the Augsburg Confession  to Emperor Charles V in Germany.

To mark the 100th anniversary of the Augustana and the public declaration of the establishment of the Evangelical Lutheran Church of the reformation, one of the foremost medallists of the 17th century, Sebastian Dadler (+1654), who was appointed Medallist and Goldsmith to the Imperial Court in Dresden in 1625, issued a classic commemorative medallion depicting Dr. Martin Luther holding a book (the Bible) with the Latin phrase translated is “The Word of the Lord Remains Forever” (a motto championed by Frederick the Wise and his noble Lutheran successors). Dr. Frederick Schumacher, Executive Director for the American Lutheran Publicity Bureau offered to St. Matthew and their current pastor, the Rev. Peter Deebrah, the suggestion of incorporating into their landmark commemorative the iconic image from this medallion contemporary to their founding members in highlighting their enduring faith in the “new world.”

The reverse of St. Matthew’s medallion bears the image of the congregation’s original church seal. The hand written text behind the seal is taken from the original charter issued by the first English Governor of N.Y., Richard Nicolls granting these Lutheran settlers the freedom to publicly worship according to their conscience, signed and dated Dec. 6, 1664. (Before this, the Dutch colonial government instituted laws that gave only the Dutch Reformed Church the right to exercise their religion, thus denying the Lutheran settlers such liberty and severely penalized them for any infractions.)

This landmark medallion comes with a very informative pamphlet including the congregation’s history, designing process, and congratulatory statement from LCMS President Matthew Harrison.

By owning one of these medals you can lay claim to being a part of America’s oldest Lutheran Church on this historic occasion – a keepsake for posterity, or a lasting gift for a loved one. This landmark commemorative is history in the making, like the medal from 1630. You can now own this piece of history of Lutheranism in America.